The project is led by Gunnar Marel Eggertsson 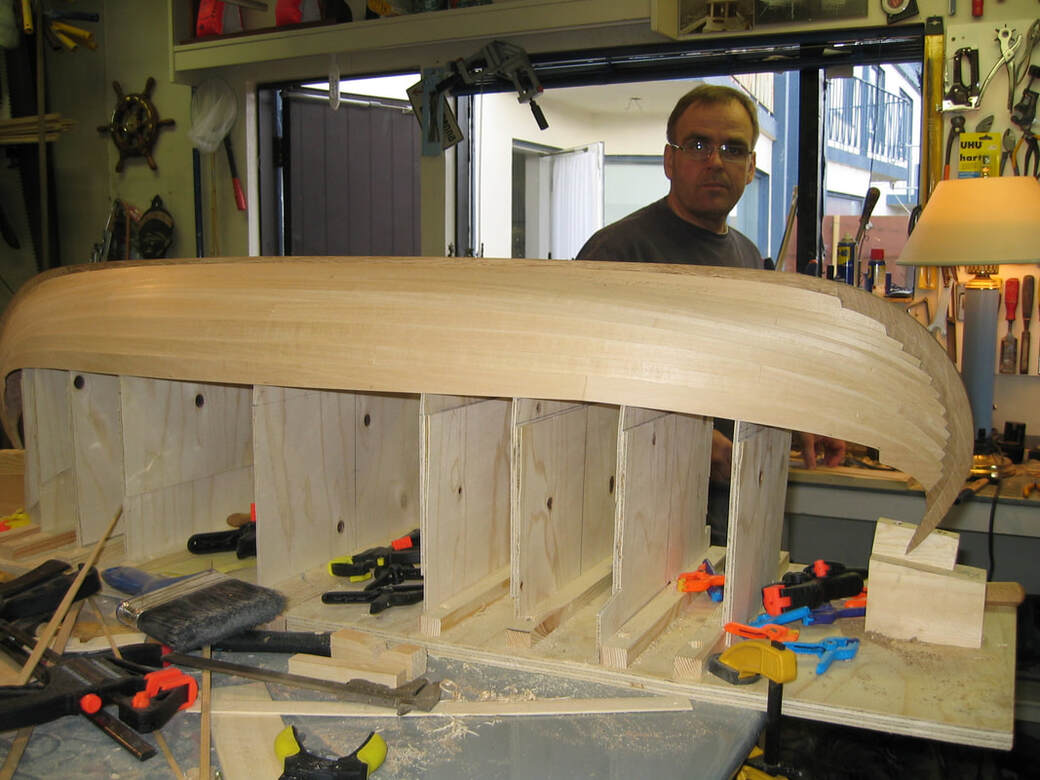 Gunnar Marel in his workshop working on a small-scale replica of the Hedeby 3 Knarr.
The driving force behind the Iceland Knarr project is Gunnar Marel Eggertsson who is well known internationally for his work with Viking ships. Gunnar Marel is both a sea captain and a master shipbuilder by trade. He is an Icelandic citizen born in the Westman Islands with extensive knowledge and long experience of building and sailing Viking ships. ​

Gunnar Marel's qualifications at a glance

​Gunnar Marel is both a master shipbuilder of trade and a shipmaster. ​His father and grandfather were both master shipbuilders and they ran their own shipbuilding company from 1925 to 1991 in the Westman Islands in Iceland.

The captain of Gaia, a Norwegian Viking ship 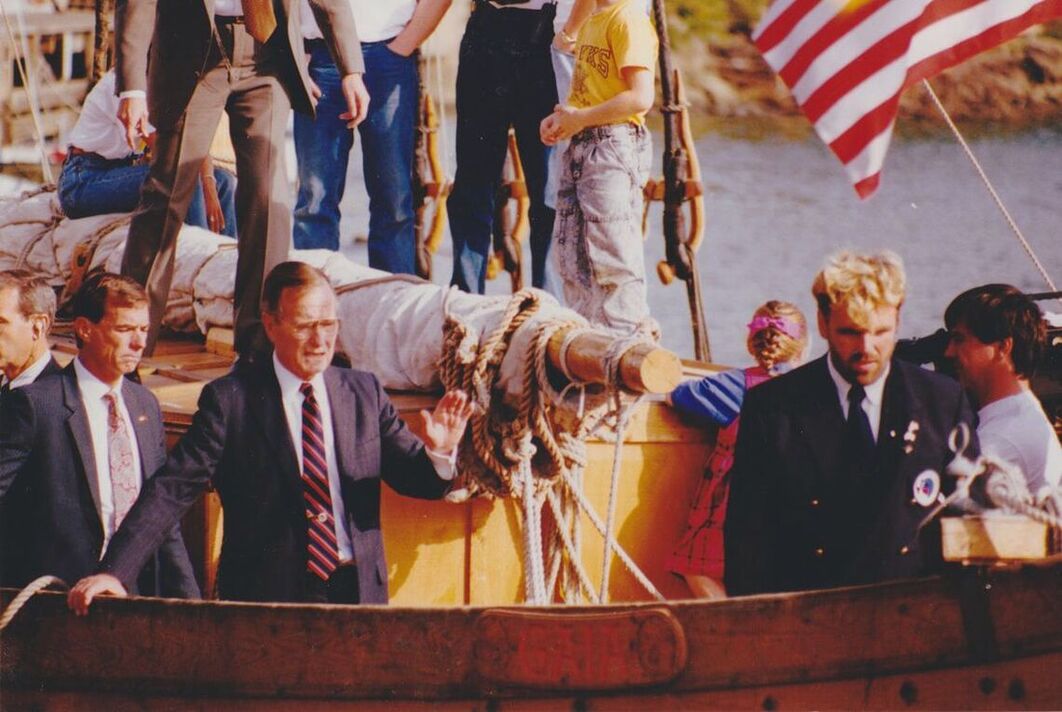 Captain Gunnar Marel (second from right) on board the Viking ship Gaia in the year 1991 with president George H W Bush
​In the year 1991, Gunnar Marel was asked to be the captain of Gaia, a Norwegian Viking ship a replica of the Gokstad ship, ​to lead the 14-month journey of Gaia from Norway to North America and then onwards to Rio de Janeiro in Brasil. The occasion was to be present during the historic Environment convention in Rio de Janeiro in June 1992. On the 14-month journey, Gaia stopped along the way in Iceland, Greenland, Canada, the USA, and other countries.

The Icelander, a Viking ship built by Gunnar Marel

In March 1996 Gunnar Marel finished building a traditional Viking warship​ that was 23 meters long and a replica of the Gokstad ship, built 870 a.d., which is preserved in Bygdøy near Oslo Norway. ​The ship called The Icelander​ (Íslendingur) took about 1 year from start to finish, ​and for most of the time, Gunnar Marel worked alone on the build. ​ 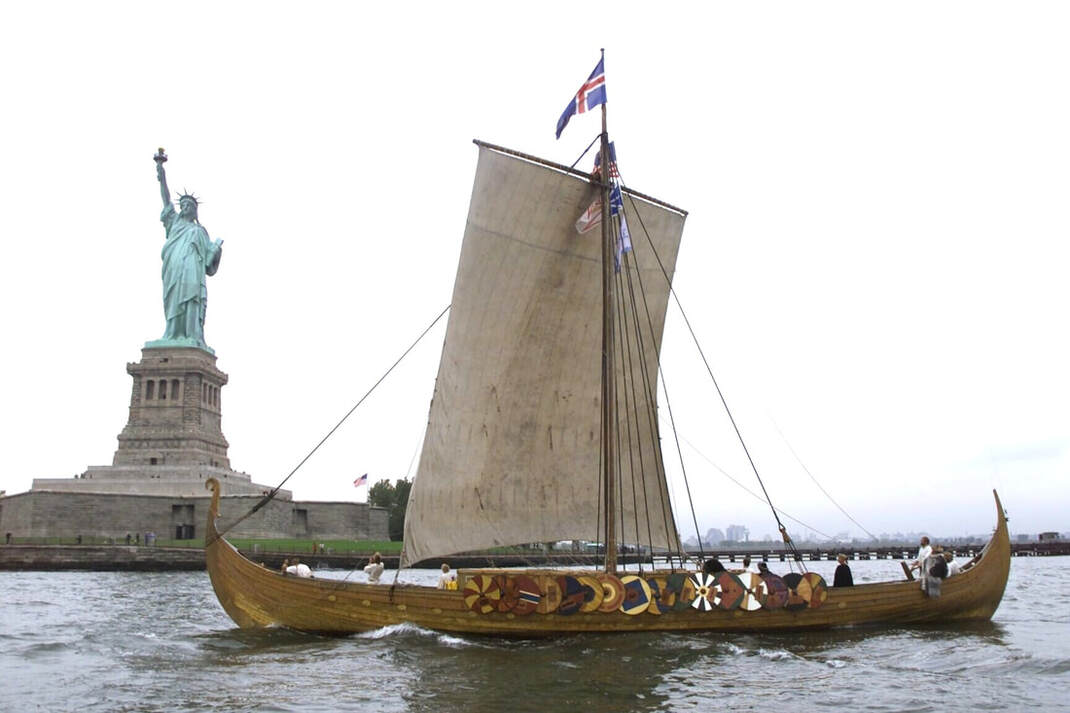 In the year 2000 Captain Gunnar Marel sailed the Icelander Viking ship he built from Iceland to America.
Building the Icelander was an extraordinary achievement. The Icelandair measures 22.5 meters in length, 5.3 meters in breadth, has a draught of 1.7 meters, and measures 80 gross tons. The ship was built of 18 tonnes of Norwegian and Swedish oak and required 5,000 nails. Her sail was made in Denmark. Her crew complement is 9; the Gokstad ship carried 70. Her average speed is 7 knots, top speed 18 knots.

In the year 1998, Gunnar Marel decided to sail the Icelander across the Atlantic as part of the millennial celebrations in the year 2000 of his ancestor Leif Eriksson's voyage to Vinland.  ​According to a historian, Leifur Eiriksson was Gunnar Marel ́s ancestor 33 generations back in his mother's family. Leifur was the first European to find America in the year 1000.

The principal sponsor of the voyage of the Icelander in the year 2000 was the Leifur Eiríksson Millennium Commission. The Commission organized nearly 230 cultural events at some 70 venues in the USA and Canada for the year 2000.

The Icelander set sail from Reykjavik on the 17th of June 2000, the Icelandic National Day, with Gunnar Marel skippering and a crew of eight including one woman. From there the ship sailed to Brattahlíð in Greenland for the celebration of the Viking settlement attended by Queen Margrethe II of Denmark. On the 28th of July, the ship arrived at L'Anse aux Meadows, Newfoundland, the single Viking settlement (Vinland) to have been discovered on the mainland North American continent and thought to be the site of the Vinland settlement, where it took part in the celebrations with other replica Viking ships. Numerous special events ensued in the wake of Icelander's momentous retracing of Leifur Eiríksson’s voyage. 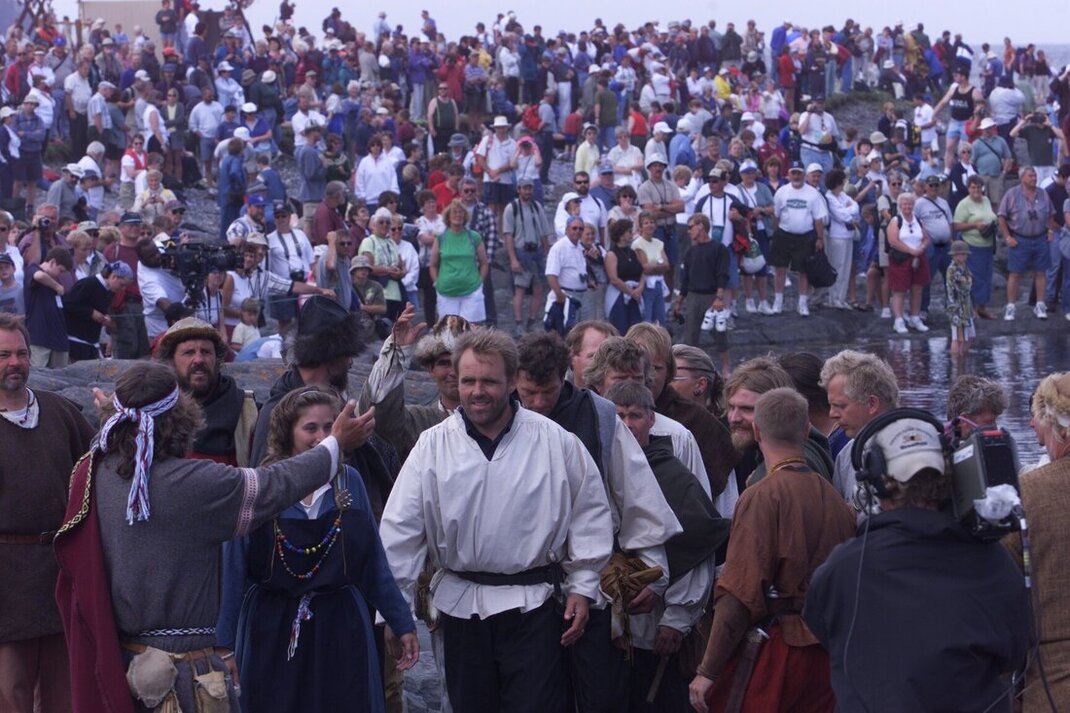 Captain Gunnar Marel in the center celebrated in Iceland after sailing the Icelander Viking ship to America in the year 2000.

The Icelander Viking ship on display

In the year 2002, the Icelander Viking ship was purchased by an Icelandic consortium led by the region of the Southern Peninsula (Reykjanes). In the year 2008, the Icelander ship was moved to a new Viking World museum​​​ (www.vikingworld.is/) where this magnificent Viking ship is the museum’s main attraction today.
​In the Viking World museum, the ship rests on pillars that lift it one and a half meters up into the air. This makes it possible for people to walk straight under the ship and enjoy its remarkable structure.​ 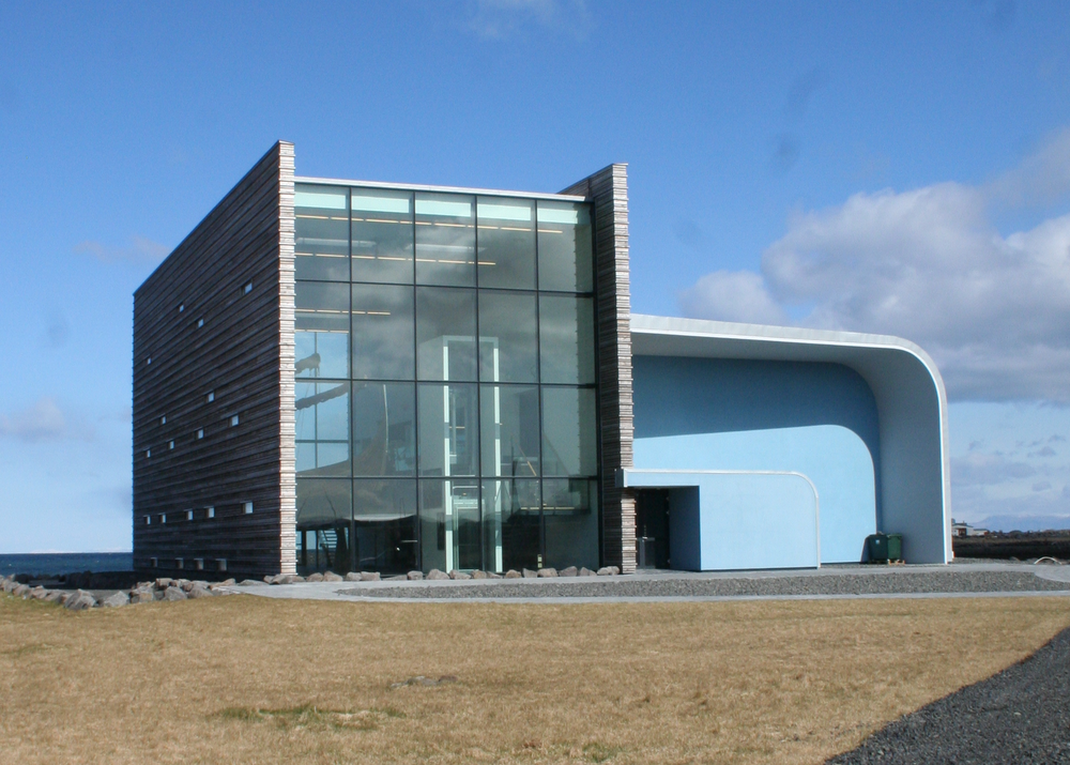 The Viking World Museum where the Icelander is on display

The Order of the Falcon awarded Gunnar Marel

In the year 2002, Gunnar Marel was awarded the Order of the Falcon by the Icelandic state for his work with the Viking ship the Icelander (Íslendingur), which he built and also sailed from Iceland to America in the year 2000 to commemorate the 1,000 year anniversary of the voyage of Icelandic explorer Leifur Eiríksson to North America.

​The Order of the Falcon is the highest honor that the Icelandic state can bestow on individuals.​