The purpose of the Iceland Knarr project

The purpose of the project is to build the first full-scale and seaworthy replica of the Hedeby 3 Viking shipwreck (Knarr), discovered in the Hedeby harbor in Schleswig-Holstein, Germany in 1980. The wreck is of the largest merchant Viking ship or Knarr found so far. Also, the purpose of the project is to sail the Knarr from Germany to Iceland not using any modern navigation tools. The name of both the project and the replica ship is Iceland Knarr.

One of the main reasons for the reconstruction is the huge importance the Hedeby 3 type of Knarr had for the settlement of Iceland.

The settlement of Iceland (Icelandic: landnámsöld) is generally believed to have begun in the second half of the ninth century when Norse settlers migrated across the North Atlantic. The Icelandic Age of Settlement is considered to have lasted from 874 to 930, at which point most of the island had been claimed.

​Because of its cargo capabilities and seaworthiness, the Hedeby 3 Knarr was the key factor in the Norse settlement of Iceland. The Knarr enabled the Norse settlers to transport a large number of people, livestock, and goods on one ship, or about 60 tons, in one journey to Iceland. This was not possible with other types of Viking ships who were either much smaller or warships not made to carry so much cargo and people. This is also why the project and the replica being built are called Iceland Knarr

It has been estimated that 15 - 20.000 Norse settlers migrated to Iceland in the first 60 years of the settlement and that all of them sailed to Iceland aboard a Knarr the same type as the Hedeby 3 Knarr.

It is believed by some experts that Leifur Eiriksson the Norse explorer from Iceland used a Knarr of the same type and size as the Hedeby 3 Viking ship. That this type of ship was the key to his discovery of North America, and this kind of ship was seen as a status symbol for a great Viking chieftain such as Leif Eiriksson.

The Hedeby 3 Knarr has yet to be replicated in our times​. It is therefore a unique and worthy task to rebuild this Viking cargo ship as close as possible to the original. ​Another task is to sail the Knarr from Germany to Iceland without modern navigation tools to demonstrate its capability of long and difficult sea voyages.

How will the Hedeby 3 Knarr look?

Gunnar Marel has built a small scale replica to present how the Knarr will look when finished: 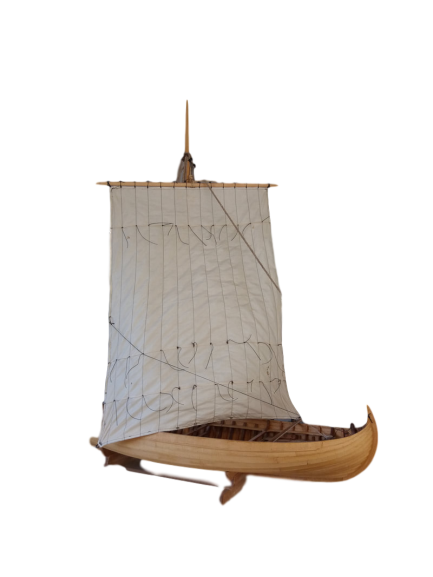 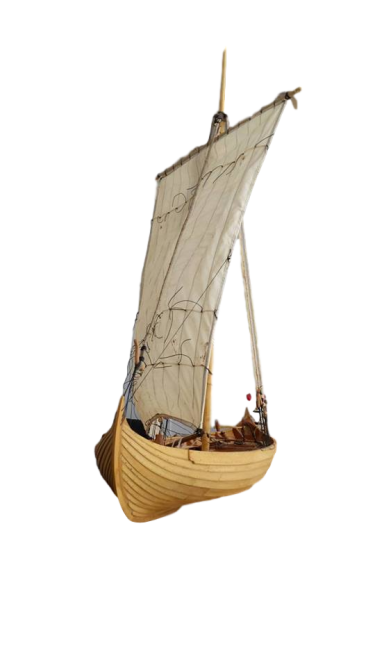 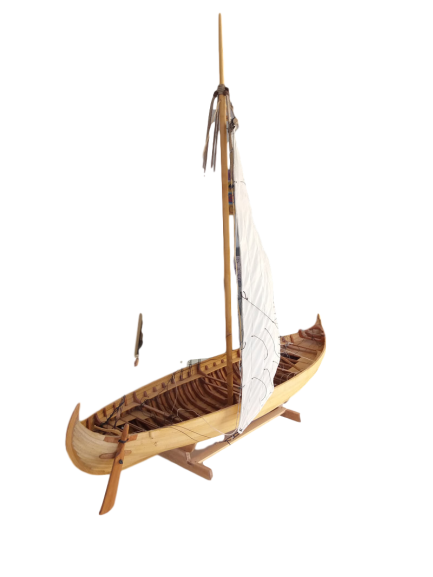 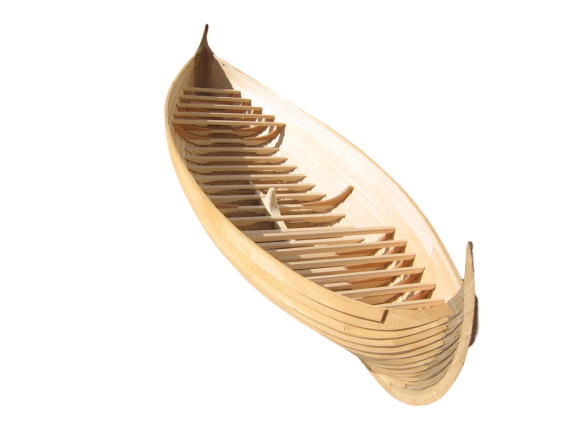 ​Small scale replica of the Iceland Knarr (Hedeby 3 wreck) made by Gunnar Marel.

Construction of the Hedeby 3 Knarr replica

The Hedeby 3 replica will be built under Gunnar Marel Eggertsson's supervision using ancient methods with external help when needed.  The ship will be built using clinker (lapstrake) built, which is the overlapping of planks riveted together. Remarkably large vessels can be constructed using traditional clinker construction. The planks from which Viking vessels were constructed were rived (split) from large, old-growth trees—especially oaks. A ship's hull could be as thin as one inch (2.5 cm), as a split plank is stronger than a sawed plank found in a younger craft.

Working up from a stout oaken keel, the shipwrights would rivet the planks together using wrought iron rivets and roves. Ribs maintained the shape of the hull sides. Each tier of planks overlapped the one below, and waterproof caulking was used between planks to create a strong but supple hull.

​The actual building of the Iceland Knarr will take place in Hedeby, Germany since this is where the Hedeby 3 Viking ship was originally built according to experts.